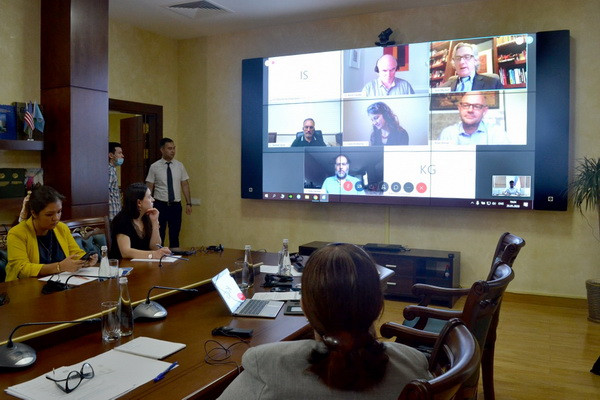 Tashkent, Uzbekistan (UzDaily.com) – A briefing was held at the Uzbekkino agency to discuss the Decree of the President of the Republic of Uzbekistan Shavkat Mirziyoyev “On measures to further enhance the role and influence of culture and art in society”.

The briefing was organized by the Ministry of Culture of the Republic of Uzbekistan, the National Association of Electronic Mass Media of Uzbekistan with the support of Uzbekkino.

The briefing was attended by representatives of state and public organizations, journalists, bloggers, directors of non-governmental television and radio channels.

As the Minister of Culture Ozodbek Nazarbekov emphasized, “the adoption of such a priority document during the difficult period of the coronavirus pandemic that the whole world and our country is experiencing, shows how important the head of our state pays to the development of culture and art. When developing this document, all the proposals put forward by representatives of all interested areas were taken into account. The adoption of the Decree aimed at the full support of the spheres of culture and art is an important step for the whole society,” he said.

At the meeting, representatives of non-state television channels made constructive proposals regarding the further popularization of cultural and educational topics on domestic television and radio channels - increasing the interest of the young generation in studying culture and increasing spirituality, as well as bringing to the general public the meaning and essence of new reforms.

In the online format, the regional television studios also took part in the briefing.

As representatives of non-state television radio channels, members of NAESMI, noted during the meeting, the role of non-state television and radio is important in large-scale reforms in the fields of culture and art. Now many media and television channels depend on how our younger generation will grow up, so it is necessary to actively implement media projects together with the Ministry of Culture to create cultural and educational programs, it was noted at a briefing.

Following the event, the parties agreed to create a single media plan, as well as the signing of a memorandum.