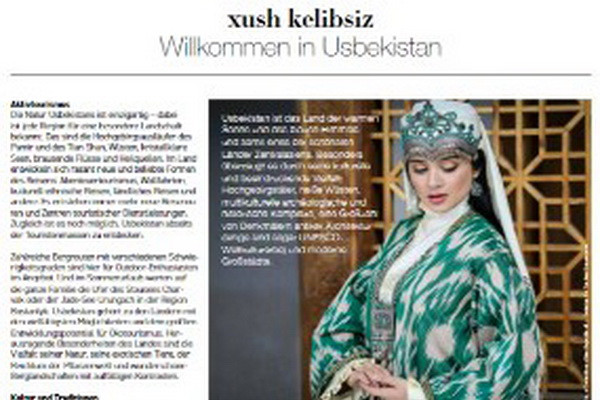 Tashkent, Uzbekistan (UzDaily.com) - In a special application “Reiseguide” of the influential German daily newspaper “Die Welt”, analytical material on the tourism potential of Uzbekistan under the heading “Welcome to Uzbekistan” has been published, Dunyo news agency reported.

It notes that Uzbekistan is one of the most beautiful countries in Central Asia with an ancient history and rich cultural heritage. The country’s territory in an amazing way combines high mountain valleys and hot deserts, multicultural archaeological and historical complexes, strewn with monuments of ancient architecture, as well as modern megacities.

The publication notes that a trip around the country promises tourists not only an informative excursion into the history of the peoples of Central Asia and acquaintance with historical sights included in the UNESCO World Heritage List, but also a fascinating journey along the ancient routes of the Great Silk Road.

The material publishes information on the unique climatic conditions of Uzbekistan, which provide an excellent opportunity for recreation and tourism. It is noted that each region can boast of its natural capabilities: high mountain ranges, foothills of the Pamir and Tien Shan, crystal clear lakes, noisy rivers and healing springs.

It is reported that the country is rapidly developing popular types of tourism - extreme, pilgrimage, ethnic, rural and others. More and more new routes and tourist service centers are being created.

“Ecotourism is one of the most popular destinations in the tourism sector, and Uzbekistan is one of the few countries in the world that has great potential and opportunities for its development,” the article says. - The country’s features are diverse nature, exotic animals, the richness of the plant world and a beautiful mountain landscape with striking contrasts. Uzbekistan has a large number of places for organizing eco tours - these are national parks and reserves.”

The authors paid special attention to the culture and traditions of the Uzbek people. In particular, it is emphasized that the distinctive culture of Uzbekistan, which grew up at the crossroads of civilizations and has more than one millennium, has incorporated the traditions and customs of the peoples who inhabited the territory of modern Uzbekistan at different times.

“Uzbek culture is the quintessence of the cultures of Central Asia, but each region of Uzbekistan has its own unique shades, which is most clearly manifested in national clothes and local dialects,” the publication notes.

German travel enthusiasts are advised to visit the unique ethnic festivals to get acquainted with the whole palette of the culture of Uzbekistan.

And finally, the authors write about the rich Uzbek national cuisine, some of the recipes of which have a long history. It is emphasized that the culture and tradition of cooking Uzbek pilaf in 2016 was included in the Representative List of the Intangible Cultural Heritage of Humanity.