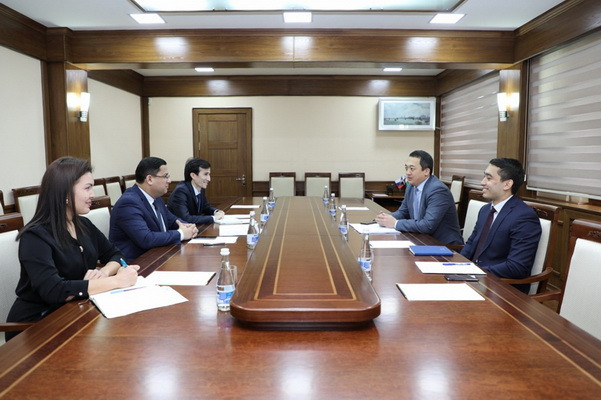 A working meeting was held with the EBRD mission on issues of documents, to be signed at the Tashkent International Investment Forum

A working meeting was held with the EBRD mission on issues of documents, to be signed at the Tashkent International Investment Forum

On 27 January, President of the Republic of Uzbekistan Shavkat Mirziyoyev held a meeting on the organization of the Tashkent International Investment Forum, where he noted that an active investment policy will be consistently continued with a view to developing the economy at a rapid pace, and a significant part of investments assimilated in 2020 will be foreign direct investment and loans.

In particular, this year it is planned to attract US$5.8 billion of foreign direct investment in the economy of our country. To this end, the Tashkent International Investment Forum will be held in March. The main goal of the forum is to attract foreign direct investment in leading sectors of the economy - energy, engineering, electrical engineering, information technology, textile industry, agriculture and food industry, construction industry, as well as in the regions of the country.

It is noteworthy that the Republic of Uzbekistan is actively cooperating with international financial institutions, including the EBRD. For example, on 10 June 2019, President of Uzbekistan Shavkat Mirziyoyev received an EBRD delegation led by its president Suma Chakrabarti, which addressed issues of accelerating investment projects and borrowing, expanding the EBRD's assistance in promoting economic reforms in Uzbekistan, creating a favorable business environment and investment climate in the country .

Uztransgaz is also actively working on preparations for this forum. In particular, within the framework of the project “Program for the modernization of the gas transmission system of the Republic of Uzbekistan with the introduction of a center for dispatching, monitoring and managing gas infrastructure facilities (SCADA)”, a working meeting was held with representatives of the EBRD on the joint implementation of the second phase of the second project.

As part of the implementation of the II phase of the Investment Project on the organization of financing of Uztransgaz, the issue of raising funds from international financial institutions (IFIs) and foreign government financial organizations (IFRS), including from the EBRD, is being worked out. To date, the EBRD is considering the possibility of allocating soft loans for the implementation of the project under a corporate guarantee.

During the meeting, the importance of the agreement on attracting international consultants from the EBRD in 4 areas was noted:

- reduction of greenhouse gas emissions, as well as reduction or elimination of methane emissions;

- liberalization of the natural gas market by arranging its sale through exchange trading based on the bank's experience in the countries of operations;

- Assistance in the preparation of Uztransgaz JSC in obtaining a corporate rating.

The parties discussed the documents planned for signing at the upcoming investment forum, including a memorandum of understanding between the Ministry of Energy of Uzbekistan, JSC Uzbekneftegaz, JSC Uztransgaz and the EBRD regarding cooperation in the framework of financing the project, as well as technical support in market liberalization natural gas in Uzbekistan. And also, the issue of signing an agreement on preliminary conditions for financing the project (Mandate letter) from the EBRD to accelerate its implementation was discussed.

The memorandum aims to provide a common framework for cooperation between the parties in improving the environment for investments in sustainable energy in the gas sector of Uzbekistan. Such improvements are considered important, in particular, to increase the competitiveness, efficiency and sustainability of the gas sector, as well as to reduce greenhouse gas emissions and air pollution and their compliance with best international practices and standards.

Following the meeting, the parties expressed mutual interest in accelerating the agreements reached.