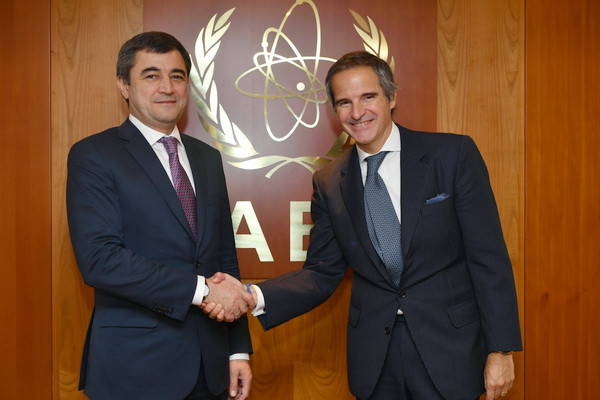 Tashkent, Uzbekistan (UzDaily.com) -- A delegation of Uzbekistan, led by Minister of Energy Alisher Sultanov, takes part in the International Conference on Nuclear Security, held on 10-14 February 2020 at the organization’s headquarters in Vienna. Within the framework of the forum, a meeting of delegation members with the newly appointed IAEA Director General Rafael Mariano Grossi took place.

During the meeting, issues of further expansion of cooperation were discussed. Mariano Grossi praised the ongoing reforms and the revitalization of Uzbekistan’s work with the IAEA. He noted that the IAEA in the person of Uzbekistan sees an important partner in the region.

They also expressed readiness to provide all possible assistance and support in the field of nuclear security and in the implementation of a large-scale project - the construction of nuclear power plants, and the IAEA mission for 2020 for a comprehensive review of nuclear infrastructure was outlined.

Mariano Grossi emphasized that the regulator plays an important role in ensuring nuclear safety in the country, in connection with which it is necessary to attach the most serious importance to the staffing potential of the regulator. A significant role in this direction is to be played by one of the IAEA missions, “Integrated Regulatory Review Services (IRRS),” which will allow the implementation of the national program of Uzbekistan in full compliance with international rules.

For the period 2020-2021, the IAEA approved four projects for the implementation in Uzbekistan for a total amount of more than 1 million euros.

The program stipulates strengthening nuclear and radiation safety in the operation of nuclear facilities in Uzbekistan, the development and implementation of modern nuclear technologies in medicine and other sectors of the economy, as well as the dissemination of knowledge about nuclear energy.