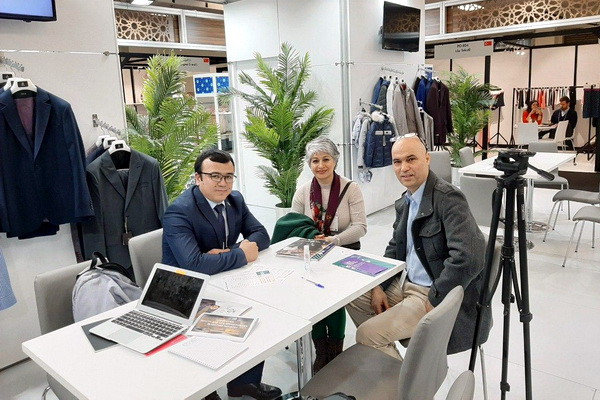 Tashkent, Uzbekistan (UzDaily.com) -- A delegation of Uzbekistan arrived in the UK, where it takes part in the Pure Origin & Pure London 2020 International Fashion Exhibition and Festival, which is taking place these days, Dunyo news agency reported.

The delegation included leaders and representatives of the Export Promotion Agency under the Ministry of Investment and Foreign Trade of the Republic of Uzbekistan, associations Uztukimachiliksanoat, Uzbekipaksanoat, Uzcharmsanoat and Hunarmand, as well as a number of domestic manufacturers of textile, silk and leather products.

“Pure Origin & Pure London” is one of the largest events in the field of trade in fashionable clothes and accessories. It is held twice a year - in February and July. More than 700 brands and designers exhibiting their products take part in it, including ready-made collections of middle and high class.

In February and July last year, the Uzbek delegation, consisting of representatives of the Uztekstilprom Association and a number of domestic textile companies, already participated in this event. Then, a contract was signed between the Vakkoni Collection company of Namangan region and The Notting Hill Gate Shopping Bag on the monthly supply of 10 thousand units of Uzbek cotton bags to Britain.

This year’s February Pure Origin & Pure London brought together more than 1,000 British and international brands presenting their best and most impressive pieces of clothing, shoes and accessories.

The general attention at the exhibition was attracted by the products of Uzbek textile and sewing-knitting enterprises. It is distinguished primarily by its naturalness and environmental friendliness. Today, fashionable stages dictate not only the general style of clothing, but also what materials it should be made of.

A non-stop video on display at the exhibition, dedicated to the trade, economic, escort and investment potential of our country in the textile and leather industries, attracts the attention of many participants and visitors.

The delegation members have already had fruitful negotiations with the Secretary General of the International Council of Leather Manufacturers and the British Federation of Leather Products Paul Pearson. The British side expressed its readiness to promote the Uzbek leather products in the British market.

Given the high quality of the Uzbek leather raw materials demanded by international brands, the possibility of implementing investment projects for the production of modern leather goods in Uzbekistan and their further export to the international market was discussed.

On the sidelines of the exhibition, the Embassy of the Republic of Uzbekistan in London organized negotiations between the delegation of Uzbekistan and potential importers, wholesalers and designers from the UK and European countries. In particular, they discussed the possibility of establishing mutually beneficial partnerships with a number of companies, including Westmark Retail Ltd, Moje Fit, Splitit, SIPPO, Caprice, Extras Group, Alpe, The Leather Mob, Smiling Faces UK ”,“ Jenttman ”and the issue of exporting Uzbek leather, silk and textile products to the British and international markets was discussed.