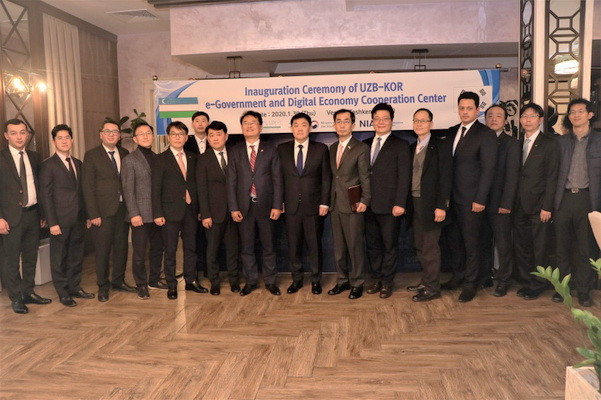 Tashkent, Uzbekistan (UzDaily.com) -- On 30 January 2020, the National Project Management Agency under the President of the Republic of Uzbekistan hosted the opening ceremony of the joint Uzbek-Korean Center for Cooperation on e-government and the digital economy.

It is important to note that the President of the Republic of Uzbekistan Shavkat Mirziyoyev in his Address to the Senate and the Legislative Chamber of the Oliy Majlis declared 2020 “Year of the Development of Science, Education and the Digital Economy.” The opening of the Center is another step to achieve the ambitious goals outlined by the head of state in this area.

At the event, the parties indicated that the strategic partnership between Uzbekistan and Korea in the development of the digital economy and e-government will bring mutually beneficial results.

The Korean side noted their readiness to provide experts who will participate in the development of the E-Government system, as well as organize short-term and long-term training courses for Agency specialists and government agencies to familiarize themselves with the Korean experience.

Within the framework of the event, a presentation of the development strategy of the Center was held, and priorities were identified for the main tasks, namely:

development of strategic directions for further development and improvement of the "Electronic Government" system based on analysis and research;

coordination of the implementation of information systems and measures to improve the e-government system, projects on digitalization and the development of the digital economy;

conducting marketing and innovative research to promote e-government and improve the quality of public services;

study and analysis of existing processes, as well as the development of proposals for system optimization of functional and operational processes.

As part of the ceremony, a meeting of the Uzbek-Korean Council on cooperation in the field of e-government was held between the delegation of the Republic of Korea, the leadership of the Agency and the Project Management Center of e-government and the digital economy under the Agency.

During the meeting, the parties discussed the results of mutual cooperation for 2019 in the field of e-government and the digital economy. As a result, further plans and goals were identified for the development of cooperation in the implementation of new information technologies, the organization of educational programs and the exchange of experience in the field of e-government, and joint research.

On 17 December 2019, in the city of Sejong (Republic of Korea), the signing ceremony of the Agreement between the Agency and the Ministry of Public Administration and Security of the Republic of Korea on the establishment of a joint Center was held. The agreement provides for the allocation by the Korean side of a grant in the amount of US$2 million over 3 years for the implementation of the Center’s projects.