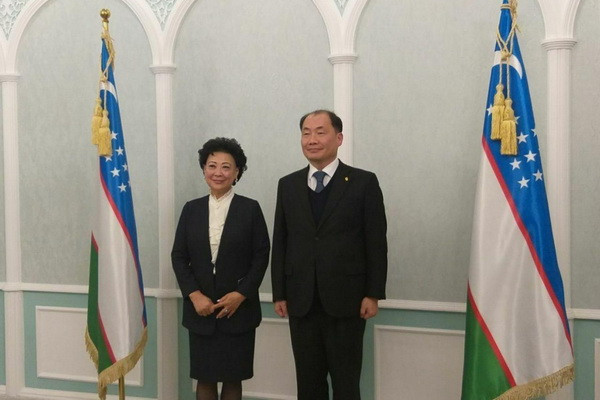 The rector of the Bucheon University makes an official visit to Uzbekistan.

The rector of the Bucheon University makes an official visit to Uzbekistan.

Tashkent, Uzbekistan (UzDaily.com) -- The development of the education system, the opening of modular groups based on kindergarten No. 486 and the work of volunteers: a visit was made by the rector of the Bucheon University.

From 8 to 10 January 2020, the rector of the Bucheon University (Republic of Korea) Han John Suk paid an official visit to Uzbekistan. During the visit, Han John Suk checked the implementation of joint projects with the Uzbek side, met with heads of several departments. As part of the visit to Uzbekistan, 45 second-year student volunteers from Bucheon University also arrived to work with pupils of the early childhood care center.

On 8 January, the beginning of the official visit program - Han John Suk, together with the delegation, visited the new educational building and training center at BUT (Bucheon University in Uzbekistan), as well as the new faculty “Development and maintenance of control devices” in Tashkent Professional College of Information Technologies (TPCIT).

The faculty was opened jointly with the Bucheon University (Republic of Korea) in early 2019. To date, the number of students has reached 100 people. Education takes place on a 2 + 2 system (the first 2 years of study in Uzbekistan, the third and fourth courses in the Republic of Korea). For the new faculty, the entire floor of the TPCIT academic building (classrooms, laboratories) was equipped in accordance with the standards and design of Bucheon University.

The curriculum is also provided by specialists at Bucheon University and adapted to the standards of the Republic of Uzbekistan. Training is conducted in Russian and Uzbek. The program also takes into account enhanced learning of the Korean language. During a visit to educational institutions, the rector talked with students of the university and the college of information technology, met with the faculty.

On 9 January, a meeting was held with the Minister of Higher and Secondary Special Education of Uzbekistan Inomjon Majidov.

During the conversation, Han John Suk emphasized the importance of training new personnel and the need for retraining / retraining of existing ones. The rector shared his successful experience in implementing a staff training and development program that operates at a university in the Republic of Korea.

During the meeting, the parties discussed the expansion of the Bucheon University branch in Tashkent, the increase in the number of students at the faculties of preschool education, the Korean language and architecture in the 2020/2021 academic year, as well as the organization of evening training at the branch.

The rector noted that Bucheon University has forty years of experience implementing educational systems in Korean technical schools. The rector assured that the university was ready to share its successful experience with Uzbekistan: methods, areas of development, training of faculty and more.

In the afternoon, a meeting was held with the Minister of Preschool Education of Uzbekistan Agrippina Shin.

Han John Suk shared with the Minister about one of the important achievements of the University in 2019. On the basis of the Bucheon University, the Center for Catering operates. Among the staff there are both cooks and nutritionists who develop menus according to the rules of healthy eating for preschool children. In 2019, the Center was able to provide food for all kindergartens in the city of Bucheon. In the conversation, both sides considered it an important initiative to create a similar center at the Bucheon University in Tashkent for catering for preschool children.

Also, the minister proposed introducing a 2 + 2 system in one of the faculties of Tashkent Pedagogical College.

During the meeting, Agrippina Shin said that in the summer of 2020, in cooperation with the Ministry of Preschool Education, a UNESCO conference on early child development will be held. The Minister invited specialists from Bucheon University to speak at the conference venue as speakers.

“This was my third visit to Uzbekistan and every time I watched it. I am very pleased that the Government of Uzbekistan actively supports reforms in the field of education, both secondary and higher, and pre-school. One of the fundamental mottos of our University is the education of a real person, and we should be encouraged to see how he translates this motto into volunteer work of our students and universal fruitful cooperation with Uzbekistan,” Han John Sok said.

It is also about creating new projects in Uzbekistan and ready-made special projects adapted for Uzbekistan in order to implement them.

On 10 January, the Minister of Preschool Education Agrippina Shin and Han John Suk took part in the opening of modular groups, based on kindergarten No. 486. When developing a project of modular preschool organizations, the experience of several countries was studied, including the experience of the Republic of Korea. The introduction of modular structures helps to solve the acute problem of lack of places for pupils. Each is a room of several interconnected sea containers. The main space is reserved for the educational and game zone with children’s furniture, toys and educational materials. The modules are made of environmentally friendly materials that provide additional thermal insulation, allowing you to keep warm and cool in any climatic conditions.

From 8 to 10 January, as part of the agreement from 18 October 2019, 45 volunteer students of the Bucheon University (Republic of Korea), together with volunteer students of the Non-Profit Organization (Uzbekistan), held classes in art No. 34 and No. 60. The main theme of the volunteers’ work was the unification of two cultures - Uzbek and Korean. Volunteers together with children created bright, festive applications, made interesting crafts using images of ornaments from Uzbekistan and Korea, and independently prepared a second breakfast using products of traditional Uzbek and Korean cuisine.

“I would like to note the fruitful work between our Universities: for three days, our students, with joint efforts and with great enthusiasm, organized leisure for the pupils of several kindergartens. I hope that this volunteer work will serve not only the acquisition of professional skills for working with children for students of our universities, but also will be a great opportunity to share experiences and create new friendships,” Nam Victor, Rector of Bucheon University in Tashkent (Uzbekistan), said.

“I consider the biggest success of this project - smiles on the faces of children with whom our volunteers worked. The main task for us was to bring joy to the children so that they were interested. I’m incredibly proud that this project has become a small but important part uniting the relations between the Republic of Korea and Uzbekistan,” Yonghun Park, Dean for Student Affairs at the Bucheon University (Republic of Korea), said.