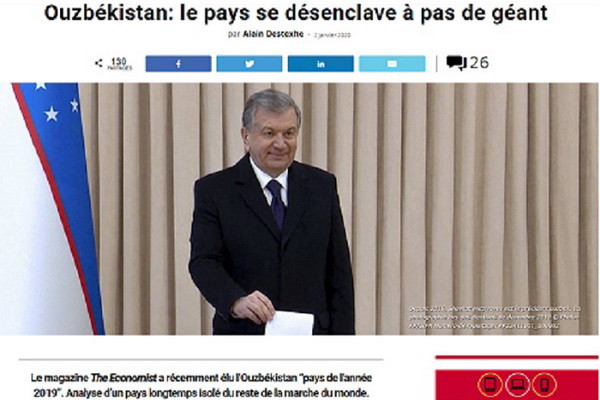 In the article entitled “Uzbekistan opens up to the world by leaps and bounds”, the author shares his impressions of the modern development of our country, which he familiarized with during his recent visit.

Noting that The Economist magazine recently called Uzbekistan the “country of 2019” for the steps taken to reform the state and society, he confirms that the ongoing changes impress representatives of foreign countries who are familiar with the republic.

Dextex writes that the ongoing reforms contribute to the influx of foreign investment and the development of the private sector, diversify the economy and develop tourism. This confirms the country's entry into the twenty best World Bank ratings of Doing Business.

It was noted that the new leadership of the state dramatically improved relations with neighboring states, which allowed to strengthen the potential of Central Asia as an important region, which occupies a central place on the Eurasian continent.

A former Belgian politician writes that Uzbekistan pursues an effective balanced foreign policy, developing friendly relations with foreign countries, actively participating in international life and putting forward important global initiatives. Priority issues remain for the country to enter the WTO and further integration into the world market. The Republic is a member of the “One Belt, One Way” initiative.

It was noted that the parliamentary elections held in Uzbekistan on 22 December 2019, demonstrated the progress made towards democratization of the state and society.

Concluding the material, the author writes that Uzbekistan deserves attention not only as a country that is achieving success today, but also as an interesting tourist destination, offering rich opportunities to get acquainted with a unique culture, history and people.

“Uzbekistan, a country about which little is said in Europe, deserves greater fame. The “New Silk Road” will give it a new geopolitical significance. No wonder The Economist publication distinguished him in 2019,” Dextex summarized.