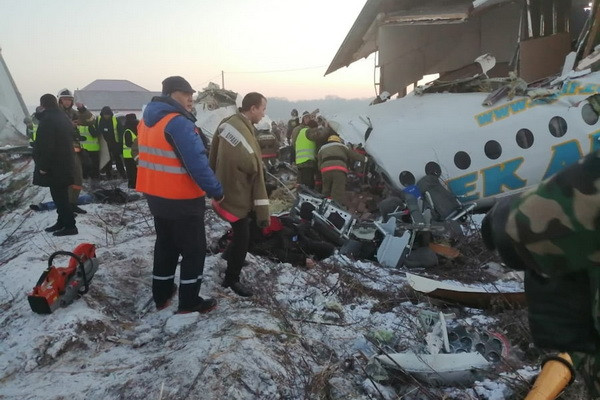 Kazakhstan flight with almost 100 onboard crashes, killing at least 12 people

Kazakhstan flight with almost 100 onboard crashes, killing at least 12 people

Flight Z9-2100, a Fokker 100 aircraft operated by Kazakhstan-based carrier Bek Air, was scheduled to fly from Almaty to Nur-Sultan.

But the plane, which was carrying 93 passengers and five crew, "lost altitude after takeoff and broke through a concrete fence," before colliding with a two-story building at approximately 7:22 a.m. local time, according to the Almaty airport authority.

Videos and images of the crash site near Kyzyl Tu village showed the damaged plane broken into several parts, with the nose embedded in a small partially-collapsed house. Parts of the fuselage appeared to be relatively intact, however, and there were no reports of fire following the crash, which may have played a factor in many passengers surviving the initial impact.

Rescue operations in the Central Asian state began immediately, with 40 ambulance crews deployed to provide medical care, the Kazakhstan aviation committee said in a statement. Emergency responders at the scene could be seen evacuating passengers and crew members from the wreckage.