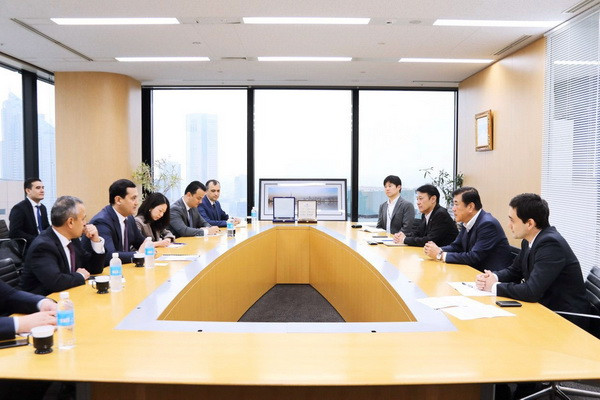 Uzbek officials hold a meeting with the Chairman of the Board of Directors H. I. S. Holdings

Uzbek officials hold a meeting with the Chairman of the Board of Directors H. I. S. Holdings

Tashkent, Uzbekistan (UzDaily.com) -- On 2 December, during a visit to Japan, a delegation of Uzbekistan led by Minister of Investment and Foreign Trade Sardor Umurzakov met with Chairman of the Board of Directors of H.I.S Holdings H. Savad.

H.I.S. Holdings is the largest Japanese travel and transportation company with many years of experience in the international market. Currently, the company has 303 branches within Japan and a global network of 185 branches in 124 cities abroad, and the total number of employees is more than 17,000 employees.

During the meeting, the development of joint projects in the hotel business was discussed - Japanese entrepreneurs in early 2020 will begin to build a Japanese-style hotel in Tashkent and are interested in implementing a similar project in Samarkand.

The tourism market also has great potential for the company - the prospect of opening an H.I.S. office was discussed. Holdings in Uzbekistan to attract tourists from Japan and other countries, as well as the effective coordination of other holding projects.

In addition, the prospects of the company’s participation in privatization activities in the banking sector were discussed. Following the meeting, the parties agreed at an expert level to work out all technical and organizational issues with a view to reaching the signing of solid investment agreements by the end of this year.