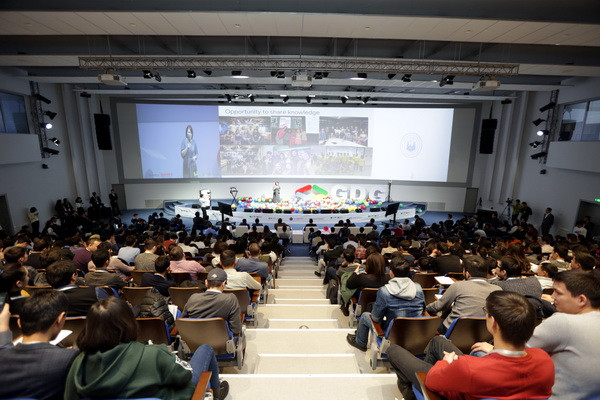 Tashkent, Uzbekistan (UzDaily.com) -- The largest conference in Central Asia "GDG DevFest" was held at Inha University in Tashkent on 30 November, bringing together developers, project managers, analysts and other IT specialists on one site, the press service of the university said. The event was hosted by Google Developers Group Tashkent.

DevFest is a series of events sponsored by Google and held around the world. This year, the conference was attended by more than 125,000 participants in 143 cities around the world, including Tashkent, where more than 1,500 people were officially registered.

During the opening ceremony, the meeting was welcomed by the Chairman of the Youth Union of Uzbekistan Alisher Sadullaev, noting that more and more new opportunities for young people in the IT field appear day after day in the country. “Today IT specialists are in demand all over the world, including in our country. Holding such events is of great importance to us. GDG DevFest is designed to become a platform for discussing modern trends, challenges and key points in the IT sphere, prospects for the development of the international youth start-up movement and entrepreneurship, ” A.Sadullaev said.

Vice-rector Turdimurat Tursunmuratov spoke on behalf of Inha University in Tashkent. He noted that the university has already established itself as a republican forge of IT personnel, and today university graduates and even students are already employees of large domestic and international companies. “The university constantly hosts major events, meetings and guest lectures. This is such a kind of coaching for our students. Listening to success stories, speeches by international experts, they improve their knowledge and skills, are inspired by their own victories, ” Tursunmuratov noted.

Speaking about the significance of the event for the youth of Uzbekistan, the organizer, leader of GDG Tashkent, Nuriddin Iminokhunov, a graduate of Inha University in Tashkent, noted that today's second conference has become the largest in the Central Asian region.

“The conference audience is youth, 30% are students, the rest are developers of different levels. Here we gathered practitioners, in addition to domestic experts, arrived and 10 foreign experts who are ready to share their experiences, sort out interesting cases and talk about new solutions in various areas of the IT sphere. The theme of my presentation is “Let's build and improve the IT sphere of Uzbekistan together.” I hope it will be useful to the audience, ” said Iminokhunov.

During the opening ceremony, the presentation of the innovation city was made by Vadim Galeev, Deputy General Director for Development and Investor Relations of the Innopolis Special Economic Zone. He spoke about the youngest city in the Russian Federation, which is only 4 years old and which has everything that is needed for a modern city dweller.

“I came to you from the youngest city in Russia, from Innopolis, this city was built in the way all IT specialists dream of. This is a compact city where everyone lives nearby, works in one large building, knows each other by sight. I would like to note that it was built in just 7 years, and it is 40 km from Kazan. We really appreciate the international expertise, and for this reason our city was developed by Lee Tucker, who is one of the founding fathers of Singapore and the developer of master plans for several more smart cities. At present, 4,000 people live in this city. The city has its own university and even unmanned taxis, as well as kindergartens, a school, an IT lyceum, sports and medical centers, post offices, banks, coworking, a beauty salon, two supermarkets, several cafes, a bar, a car wash, pharmacies, a sports rental equipment, flower shop, time cafe, hobby center, etc. And we also have some kind of event taking place every day. 365 days - 365 events, ” concluded Galeev.

Another speaker, Tanya Butenko, told how, having moved from Ukraine to Australia, she was able to master the profession of a programmer from scratch and find a job in one of the world's leading companies “Women Who Code” in Sydney. “Not only in Uzbekistan, but throughout the world it is often said that there are no women in IT, because they are not interested. But the numbers prove the opposite. It’s just that women, especially newcomers to the field, are reluctant to attend events where only men are present. This self-doubt is instilled in them from childhood, when girls are told that laptops, gadgets and all sorts of engineering stuff are not for them. But if you read the history of programming, it turns out that it was women who stood at its origins, ” Butenko noted.