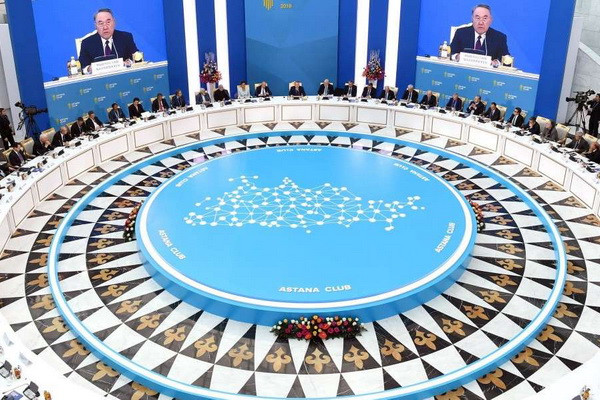 Relations between Kazakhstan and Uzbekistan are the key to the future of Central Asia, ex-Prime Minister of Georgia Giorgi Kvirikashvili

Relations between Kazakhstan and Uzbekistan are the key to the future of Central Asia, ex-Prime Minister of Georgia Giorgi Kvirikashvili

Tashkent, Uzbekistan (UzDaily.com) –– EBRD International Advisor, Prime Minister of Georgia (2015-2018) Georgy Kvirikashvili made a forecast of Eurasia’s development opportunities during the open panel session “The Age of Global Uncertainty: Challenges and Opportunities for Eurasia 2010”, held within the framework of V anniversary meeting of the Astana Club political forum, on 11 November.

“Central Asia is a place of optimism. This is a very promising science, the positive dynamics of the development of the region. The main pillar for the positive regional future of Central Asia is the strengthening of ties between Kazakhstan, a country that has shown tremendous development over the past 20 years, and Uzbekistan, a country that has recently announced its desire to open up a market economy, open up to neighbors, and cooperate more deeply with regional players in plan of the economy. Here we see a high potential for cooperation not only between the two countries, but also for the establishment of security and prosperity in this region in the broader sense of the word. The key to success and stability of the Eurasian continent is here,” Georgy Kvirikashvili said.

Assessing the prospects for the development of international politics of world powers, Kvirikashvili suggested that in 2020 Washington will be more selective in its approach to global issues, in view of the pragmatic policy. Russia, in his opinion, will not change its course in foreign policy, but China will continue to implement the principle of peaceful recovery, as the country is actively developing technologically not only on the Eurasian continent, but also on a global level.

On 11-12 November, the fifth meeting of the Astana Club, the authoritative international discussion platform in the form of a political forum, bringing together leading international experts, politicians and diplomats, is taking place at the Nazarbayev Center.

The organizers of the Club are the Foundation of the First President of the Republic of Kazakhstan - Elbasy and the Institute of World Economy and Politics under the Fund.

The theme of the anniversary meeting is “Greater Eurasia: Towards a New Architecture of Global Cooperation”.

At the center of expert discussions, Astana Club 2019 is the current aggravation of the confrontation in the triangle of the USA, China and Russia, the growth of trade protectionism and populist sentiments, as well as a new round of escalation around Iran and North Korea.

During the event, the second edition of the “Top 10 Risks for Eurasia in 2020” Analytical Rating, created by the Institute of World Economy and Politics, was presented to the attention of participants and the general public.

Among them are the aftershocks of the US presidential election in 2020, the global economic recession, the escalation of the US-China confrontation, the new stage of the global arms race, the intensification of the struggle for technological dominance, the military campaign against Iran, the nuclear crisis on the Korean Peninsula, the new surge of terrorism, the wave aggressive nationalism and populism, large-scale problems due to climate change.

Over the period of its activity, the Club was attended by more than 200 speakers from 40 countries, including the USA, China, Russia, Iran, Germany, Turkey, Great Britain, France, Japan, South Korea, etc.