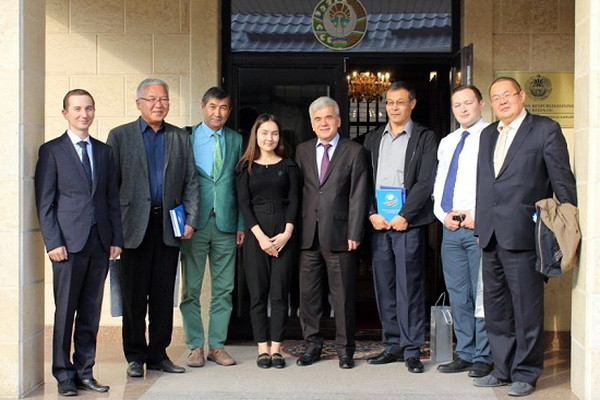 Tashkent, Uzbekistan (UzDaily.com) - A round table was held at the Embassy of Uzbekistan in Bishkek, with the participation of prominent political scientists, representatives of expert and analytical and academic circles of Kyrgyzstan, Dunyo reported.

The event was dedicated to the priorities of the chairmanship of Uzbekistan in the CIS in the coming period, the participation of Uzbekistan in the activities of the Turkic Council. At the meeting, an exchange of views took place on issues of regional cooperation, relevant issues of the Uzbek-Kyrgyz bilateral cooperation in the light of relevant initiatives and new approaches of the leadership of the two states.

Employees of the Embassy, with the assistance of experts from the Information and Analytical Center for International Relations under the Ministry of Foreign Affairs of the Republic of Uzbekistan, organized a presentation on Tashkent’s vision of the prospects and tasks of further development of the Commonwealth of Independent States and the Turkic Council.

Muratbek Imanaliev, ex-Secretary General of the SCO, professor of the Diplomatic Academy of the Kyrgyz Ministry of Foreign Affairs, noted that joining such a strong player as Uzbekistan to the activities of the CCTS will undoubtedly contribute to the development of the Organization and will give a new impetus to building relations between the participating countries.

“Uzbekistan pursues an open foreign policy, focused primarily on its neighbors, including Kyrgyzstan,” he said. - Relations between the two countries have reached a high level. Cross-border cooperation is expanding, bilateral trade has intensified, mutual trade volumes are growing, and mutual trips of citizens, tourist flows and delegation exchanges have increased significantly.

“The reforms carried out at the initiative of the President of Uzbekistan are impressive in their scale and dynamic pace, including in the social sphere, economy, state and public construction, as well as the judicial and legal system and foreign policy,” said Valentin Bogatyrev, head of the Perspektiva analytical consortium.

- For Uzbekistan, the chairmanship in the CIS is not nominal. President Sh.Mirziyoyev intends to study specific economic topics with their humanitarian support, which will allow the economy of Uzbekistan to grow, and generally enrich all regional trade,” said Denis Berdakov, director of the Eurasian Research and Consulting Group. - I believe that one of the most important initiatives of the President of Uzbekistan at the CIS summit was the issue of enhancing the work of the Commonwealth free trade zone, which for many years supported trade and economic relations in the post-Soviet space, but with the advent of the EAEU, its status needs to be revised.

“The entry of Uzbekistan into the CCTS has caused increased interest in this political event in Kyrgyz analytical circles,” said expert Mars Sariev. - A key aspect that deserves great respect is the orientation of Uzbekistan towards rapprochement with its neighbors.

“The entry of Uzbekistan as a key country in Central Asia can bring innovative ideas of an integrated nature to the SGTS agenda,” said Sheradil Baktygulov, an expert at the National Institute for Strategic Studies of the Kyrgyz Republic. - The initiatives of the Uzbek side to intensify trade, economic, investment, cultural and humanitarian cooperation indicate a qualitatively new approach to building relations within the CIS that meets the interests of all parties.