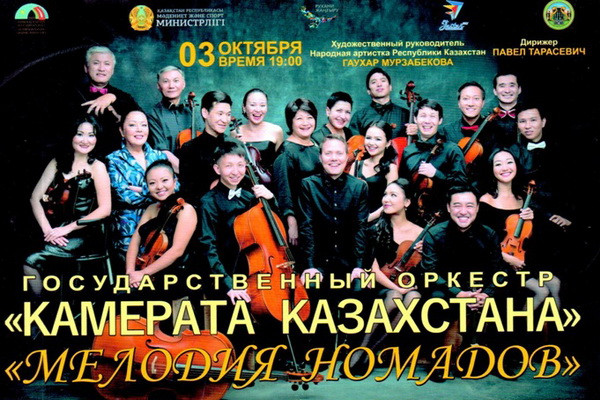 A concert of the Kazakhstan chamber orchestra takes place in Tashkent

A concert of the Kazakhstan chamber orchestra takes place in Tashkent

Tashkent, Uzbekistan (UzDaily.com) -- As part of the Year of Kazakhstan, a concert of the Kazakh State ensemble of classical music “Camerata of Kazakhstan” took place in the Great Hall of the State Conservatory of Uzbekistan.

Cultural figures from a neighboring state came up with a new program called “Ringtones of Nomads.” The best and brightest works of Kazakhstani and Turkic-speaking composers sounded in it. The triumphal finale of the concert program was the famous kyu “Balbyrauyn” of the famous Kazakh folk musician Kurmangazy Sagyrbayuly.

As the host of the musical evening, People’s Artist, Kazakhstan State Prize Laureate, ensemble art director Gaukhar Murzabekova noted, the orchestra has been promoting the best examples of world classical and modern chamber music for 22 years, performing with concert programs in Kazakhstan and abroad.

In an interview with the Dunyo correspondent, G. Murzabekova said that “Nomad Melodies” is a vibrant, diverse musical program that reflects aspects of both the modern world and nomadic culture, the main idea of which is in-depth communication between man and nature, their similarities, each other's acceptance, tolerance and dialogue.

“In the musical repertoire that we represent, there are melodies written not only by Kazakhstani but also by Uzbek, Turkmen and Kyrgyz composers,” she says. - The orchestra includes young musicians, many of whom are laureates of international festivals and competitions. One of the important areas of our team is enlightenment, so we are happy to organize and participate in various cultural events and festivals. In 2012 and 2017, we successfully hosted the international chamber music festivals of contemporary composers of the CIS and Turkic-speaking countries “Camerata tempo”. The Central Asian countries are fraternal peoples and, therefore, we came here with great joy.

The famous Uzbek composer, chairman of the Union of Composers and Bastacors of Uzbekistan Rustam Abdullayev said that he was glad to come to Uzbekistan with this magnificent chamber orchestra, whose creative skill inspires, and the perfectly clean and technical game is especially inspiring.

“I consider the performance of this Kazakh creative team in Uzbekistan to be a big event,” he emphasized. - In due time I with pleasure listened to them not only in Kazakhstan, but also abroad. I would like to say separately that there are few such orchestras in the world. I will especially note the young and talented conductor of this orchestra. I am sure that those who attended this concert received a lot of pleasure. I am glad that the bonds of friendship between our fraternal peoples, thanks to such cultural evenings, are expanding and gaining strength.