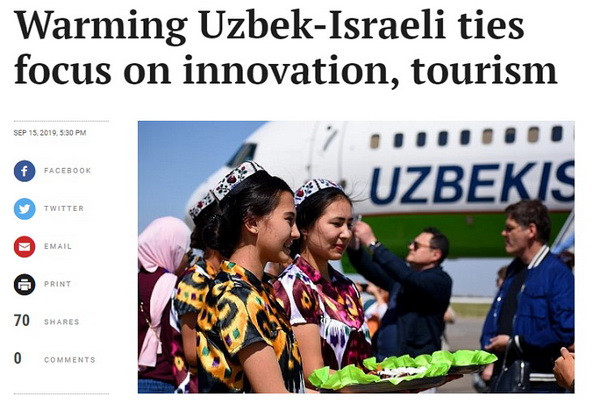 The Times of Israel publishes article about Uzbekistan

The Times of Israel publishes article about Uzbekistan

One of them - an interview with the Ambassador of Israel to Uzbekistan E. Shapiro under the heading “Warm Uzbek-Israeli relations are aimed at innovation and tourism”, is devoted to the latest trends in bilateral cooperation.

In particular, an Israeli diplomat gives an analysis of the economic policy pursued by the leadership of Uzbekistan, aimed at improving the level and quality of life of the population. He notes the passivity of Israeli investors, despite the fact that there are rather bright prospects for cooperation, for example, in the development of the republic’s infrastructure, taking into account the experience and technologies of Israel in the field of water purification and micro-irrigation systems.

Speaking about the tourism potential of Uzbekistan, E. Shapiro noted the targeted policy of the state to create favorable conditions for the development of the country’s tourism industry. He emphasized that the ancient cities of Samarkand, Bukhara and Tashkent, located along the ancient Silk Road, are attractive for tourists from all over the world.

In the article “Adventures on the Silk Road”, an Israeli journalist admires a tour of Tashkent, including a visit to a metropolitan attraction such as the Tilla Sheikh Mosque and the adjacent library museum, which houses the oldest manuscript copy of the holy Quran. He was also captivated by the openness and hospitality of the Uzbek people, the beauty of folk musical traditions and the unique taste of national cuisine.

Speaking about Samarkand, the author notes its unique architecture, as well as participation in the grand opening of the XII Sharq Taronalari International Music Festival.

The article “Uzbekistan is building a huge Center for Islamic Civilization” talks about the author visiting the construction site of this facility, the initiative for creating it belongs to the President of Uzbekistan Shavkat Mirziyoyev.

The journalist writes about the main goals of the future Center, including the need to bring to the wide world public the humanistic essence of Islam, describes the main architectural and technical parameters of the complex.