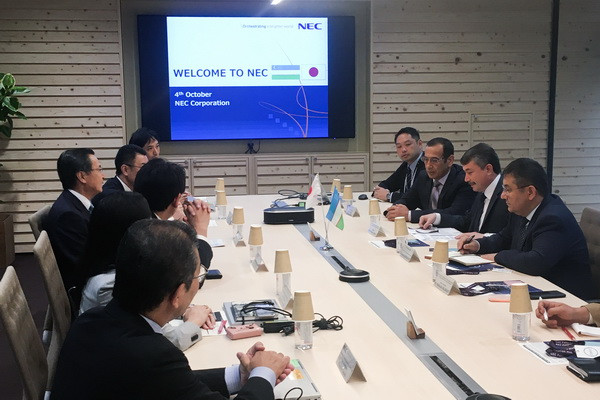 Tashkent, Uzbekistan (UzDaily.com) -- On 4 October 2019, in the capital of Japan, Tokyo, a meeting was held between the Minister of Development of Information Technologies and Communications of the Republic of Uzbekistan Shukhrat Sadikov and the chairman of the Japanese company "NEC" Norihiko Ishiguro.

At the meeting, the main focus was on developing new investment projects with large companies and expanding joint work.

During the meeting, it was noted that projects have already been implemented on long-term effective cooperation with the NEC Corporation, including the modernization of the telecommunication infrastructure and equipment for broadcasting in Uzbekistan.

During the conversation, practical aspects of the implementation of the project “Expansion of the backbone and multiservice data transmission network in terms of expanding the backbone network using optical channel densification technology (DWDM)” were discussed, in which the Japanese Bank for International Cooperation (JBIC), commercial banks of this country, credit institutions. They also exchanged views on promising projects, and explored the capabilities of modern telecommunications and information technologies.

During the meeting, promising areas of cooperation on a bilateral basis were discussed, including participation in the ICT sector and other important issues.

At the end of the meeting, the parties agreed to exchange experiences and cooperate in the creation of data centers in Uzbekistan.

Minister of Development of Information Technologies and Communications Shukhrat Sadikov, studying the capabilities of the company, visited the NEC exhibition hall.

During the exhibition, he got acquainted with the latest technologies and the latest solutions for their implementation.