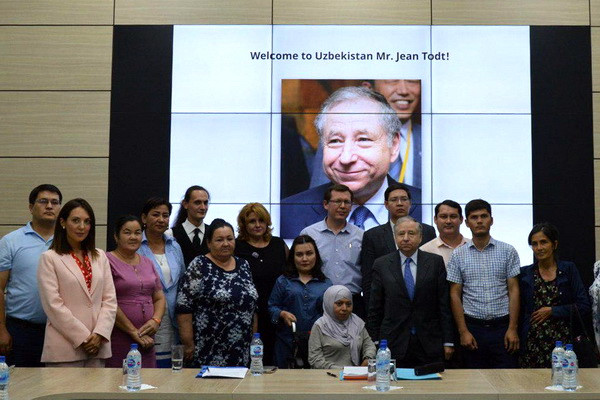 Jean Todt: Compliance with basic safety rules to reduce the number of accidents at least twice

Jean Todt: Compliance with basic safety rules to reduce the number of accidents at least twice

Tashkent, Uzbekistan (UzDaily.com) -- A series of meetings of the UN Special Envoy for Road Safety, Jean Todt, with representatives of non-governmental non-profit organizations, the private sector and structures responsible for road traffic, and youth were held at the office of the Yuksalish National Movement.

The UN Special Envoy emphasized the problems of road safety in the world. Traffic accidents annually kill 1.35 million people worldwide and cause serious injuries of 50 million people. Road traffic injuries are the leading cause of death among children and youth. It leads to significant social and economic consequences. In most countries, economic damage reaches 5 percent of GDP.

According to Todt, one of the key causes of the problem is a number of elementary violations that drivers on the road commit: speeding, ignoring seat belts, drunk driving, sending SMS and talking on the phone while driving. The elimination of such situations and the observance of elementary safety rules will reduce the number of road traffic accidents by at least half. In this regard, it is important to increase the personal responsibility of participants in the movement, including through their widespread communication about the consequences of traffic violations.

It was noted that an integrated approach is important. At the national level, the responsibility lies with governments, as they have the necessary tools and levers to change the legislative framework, but community groups and youth are important, which can encourage different sectors of society to follow the rules and safety on the roads.