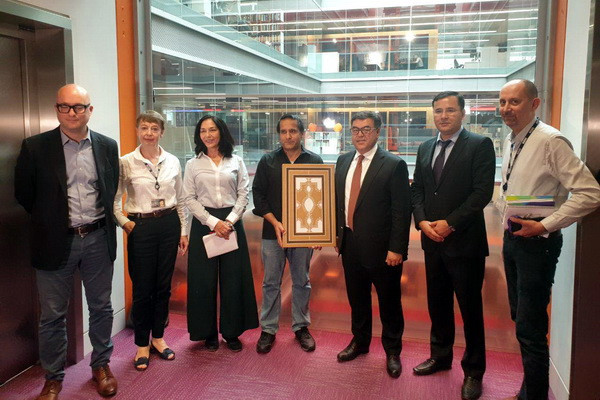 Tashkent, Uzbekistan (UzDaily.com) –  In London, a meeting was held between the leaders of the Uzbekkino National Agency and the BBC Broadcasting House.

As part of the meeting, an agreement was reached to begin production of a series of new documentaries, which will tell the viewer about the historical changes in Central Asia that have occurred over the past 3 years, including a reset of relations between Uzbekistan and Afghanistan, and how these changes affected the lives of ordinary people and the region as a whole.

In addition, an agreement was reached on the creation of tapes of historical and cultural direction. The head of this list is a film about the first Central Asian photographer and founder of Uzbek cinema, Khudaibergen Devanov.

Frederic Durman, head of business development in the USA and Europe, noted that the BBC are pleased to develop intensive and fruitful international cooperation with Uzbekistan. The implementation of new projects will undoubtedly expand the audience for both the BBC in Uzbekistan and Uzbekistan in the world.

“The successful implementation of the Kattalangar Quran: Myths and Facts project is a successful example of the BBC’s cooperation with Uzbekistan. Through this film, we tried to convey to the international audience, especially for Middle Eastern countries, information about the rich cultural heritage of Uzbekistan, as well as the ideas of enlightened Islam,” Salim Patka, the head of the journalism department in the Middle East, noted during the meeting.

In turn, the director general of the Uzbekkino National Agency, Firdavs Abdukhalikov, stated the importance of the joint production of not only documentaries by the parties, but also of conducting systematic training seminars aimed at improving the creative level of young documentaries in Uzbekistan.

“When we talk about cinema, we must not forget about such a popular genre in the world as documentary. Today, there are many tricks and creative approaches to creating such documentaries that attract huge audiences. And we hope that this project will give the world not only films about the new Uzbekistan and its great historical past, but also create a fresh growth of Uzbek documentary filmmakers,” F.Abdukhalikov emphasized.