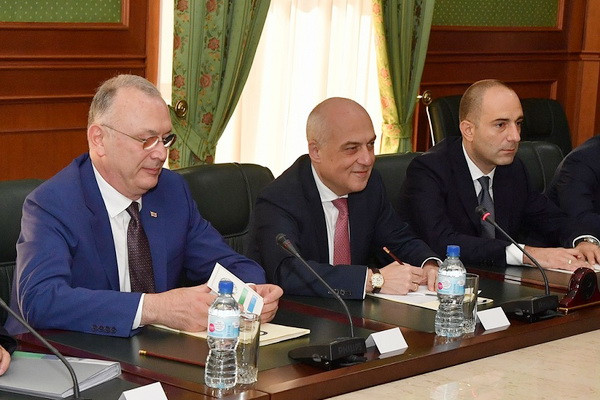 Abdulaziz Kamilov meets with the Minister of Foreign Affairs of Georgia

Abdulaziz Kamilov meets with the Minister of Foreign Affairs of Georgia

At the beginning of the meeting, the foreign ministers exchanged congratulations on the occasion of a significant date in the history of the two countries - the 25th anniversary of the establishment of diplomatic relations between Uzbekistan and Georgia.

In a thorough conversation the parties reaffirmed their mutual interest in strengthening and developing long-term and mutually beneficial relations in the political, trade, economic, investment, transport and communication, tourism, cultural and humanitarian and other fields.

The ministers spoke in favor of intensifying the activities of bilateral institutions of cooperation and contacts in various formats. As emphasized, thanks to the set of measures taken, as well as the initiative of the business community, the bilateral trade turnover for 7 months of this year increased by more than 80% compared to the same period in 2018.

The regular air service between Tashkent and Tbilisi, begun on July 16, opens up new opportunities for establishing direct ties between businessmen of the two countries, for increasing cooperation in the tourism sector, and also contributes to the expansion of scientific, technical, cultural and humanitarian exchanges.

The meeting also held an exchange of views on pressing international issues, including issues of interaction within the UN and other organizations.

The talks were attended by the Ambassador of Georgia Zurab Abdushelishvili.