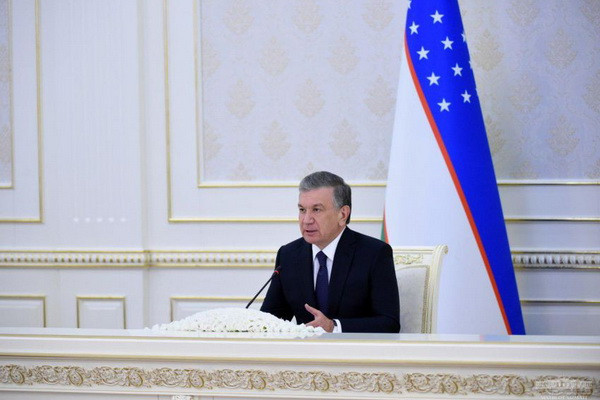 Further tasks are identified for development of physical culture and sports

Further tasks are identified for development of physical culture and sports

Tashkent, Uzbekistan (UzDaily.com) -- President of the Republic of Uzbekistan Shavkat Mirziyoyev chaired a videoconference meeting on September 4 to discuss the development of physical culture and sports education, consolidation of efforts designed to prepare for international competitions.

As it was noted at the meeting, enormous amount of work has been undertaken in this area in recent years. In particular, the Ministry of Physical Culture and Sports was established to improve the management in the sphere. The Concept for the Development of Physical Culture and Sports for 2019-2023 was approved. The system of special tests “Alpomish” and “Barchinoi” was introduced to determine the general level of physical fitness and public health.

As part of the implementation of the Five Initiatives, the “Obod Qishloq” and “Obod Makhalla” programs, sports facilities are being commissioned, and youth are actively involved in sports. 204 winners of the Olympic Games, World and Asian Championships are engaged in the development of the sphere in districts and towns, and some of them have opened personal sports schools.

At Asian Games last year, Uzbekistan’s athletes won 70 awards, including 21 gold, 24 silver and 25 bronze medals, and became fifth in the team event.
And over the past period of this year, 442 medals have been earned at international tournaments, of which 145 are gold, 134 silver, 163 bronze medals.

The meeting participants discussed issues of thorough preparation for the forthcoming tournaments, creation of necessary conditions at places.

The unsatisfactory state of preparations for the XXXII Summer Olympics 2020 in Tokyo, Japan, insufficient attention from a number of sports federations and khokimiyats to deliver opportunities for athletes that provide good results were criticized.

The National Olympic Committee, the Ministry of Physical Culture and Sports have been instructed to create even wider conditions for eligible athletes applying for high places and Olympic licenses during the impending international competitions in the months to come.

It was noted that the material and technical base is certainly important, but the result is provided by talented athletes, whose selection requires a strong qualification system.

The quantity and quality of the organization of local competitions still hardly meets the requirements. For example, in 131 towns and districts of Andijan, Bukhara, Navoi, Namangan, Tashkent, Khorezm, Fergana and Kashkadarya regions, local budgets were not allocated to finance competitions. In 230 tournaments of the national level, teams of some cities and regions were not represented. This negatively affects the selection of gifted athletes in the national teams.

In this regard, the need was noted for a stocktaking of sports facilities, a restart of the system for the formation of sports reserves, selection and collection of talented athletes.

Quick recovery of athletes needs pharmacological assistance. In our country, work is barely sufficient to study the experience of developed nations in the field of sports pharmacology, there is no scientific basis for creating new drugs, as well as qualified specialists in this field. Many athletes do not have information on the substances allowed for use and which are considered doping.

None of the sports federations has a comprehensive laboratory for monitoring the preparation of national teams for competitions and the process of their restoration.

Based on this, the relevant ministries were tasked with elaborating a draft resolution on the development of sports pharmacology, the organization of integrated laboratories in sports federations.

Built on the experience of foreign countries, it was proposed to organize a single center for preparation for the Olympic Games.
Instructions were given on improving the activities of the Center for Scientific and Methodological Support, Retraining and Advanced Training of Specialists in Physical Education and Sports and the Republican Center for Sports Medicine, updating curricula and methodology, introducing innovative technologies in training athletes.

Particular attention at the meeting was given to the extensive engagement of the population, especially youth, in mass sports.

The salary of coaches for youth schools, schools of the Olympic reserve and higher sports skills is almost half that of physical education teachers in general schools. In addition, 51 percent of coaches have specialized secondary education; there is a shortage of more than two thousand coaches with higher education.

Sports facilities of higher education institutions are able to cover almost 50 percent of students, but only 21 percent of them practice sports in such venues.
In general, more than 12 thousand sports facilities are operating in the country, their cover capacity is almost 1.5 million people a day. This means that the provision of the population with sports facilities does not exceed 4.5 percent. In particular, in Samarkand region this indicator is as low as 3.4 percent, in Surkhandarya it is 3.5, in Andijan – 3.7 percent.

President Shavkat Mirziyoyev wondered how it is possible in such circumstances to make sports a mass activity.

The meeting participants discussed steadfast solution to these and other problems, the allocation of necessary funds and resources.

Measures have been identified for the construction and repair of sports facilities in educational institutions, outfitting them with modern sports equipment, bolstering the material and technical base of specialized boarding schools.

Issues of organizing sports tournaments and physical culture Olympiads among schoolchildren, providing their winners with the opportunity to be admitted to universities in this area on a preferential basis, as well as assigning them sports categories, were considered. It was proposed to assign salary supplements, higher ranks and titles for physical education teachers who have prepared contest winners.

Recommendations were given on expanding the training of sports personnel, introducing a platform for intensive advanced training, and organizing special correspondence departments for training coaches in the most popular areas.

The President stressed the need for specialization of higher education institutions in certain sports based on their capabilities and specifics. This will allow, along with the meaningful organization of students’ leisure activities, to attract talented athletes to professional sports through cooperation with sports federations.

The instructions at the meeting included also the development of proposals for the specialization of universities and districts (towns) for specific sports, stimulating youth and physical education teachers who have achieved high sports results.

Khokims and decision makers in the sphere provided information on the issues discussed at the videoconference meeting.