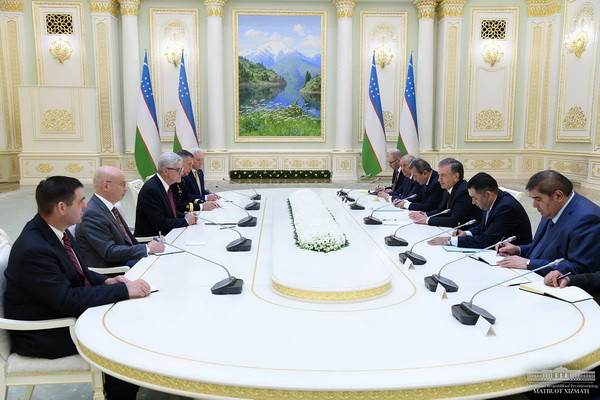 President of the Republic of Uzbekistan receives the United States delegation

President of the Republic of Uzbekistan receives the United States delegation

Tashkent, Uzbekistan (UzDaily.com) -- On 14 May, the President of the Republic of Uzbekistan Shavkat Mirziyoyev received a delegation of the state of Mississippi led by Governor Phillip Bryant.

The American delegation that arrived in Uzbekistan includes representatives of the administration, leading organizations and companies of Mississippi in the fields of trade, innovation, industry, agriculture and education.

Welcoming the guests cordially, President Shavkat Mirziyoyev stressed that the visit is indicative of an intensive dialogue and dynamically developing multidimensional relations between Uzbekistan and the United States within the framework of the new era of strategic partnership.

In turn, Governor Phil Bryant, expressing sincere gratitude for the warm reception, conveyed the greetings and best wishes from the U.S. President Donald Trump to the President of Uzbekistan.

During the conversation, the meeting participants noted with satisfaction the marked intensification of contacts at different levels, the doubling of mutual trade, successful implementation of joint programs and cooperation projects in the fields of investment, agriculture, industry, transport, tourism, and humanitarian exchanges.

Issues of enhancing practical cooperation between Uzbekistan and the state of Mississippi were substantively considered. Particular attention was paid to the promotion of promising projects in agriculture, biotechnology and agricultural chemistry, plant growing, animal husbandry and fish farming, textile industry and logistics, primarily through the creation of modern clusters and production facilities based on the introduction of advanced American technologies and knowledge.

The sides reached agreement on launching the activities of a bilateral commission for the preparation and implementation of specific projects and programs.

It was also noted that Uzbekistan – American – Canadian Business Forum, to be held on May 16-17 in Navoi, with participation of more than 40 companies from the United States and Canada, will help establish long-term partnership among the business communities.

Members of the American delegation gave a high acclaim to the effects of reforms implemented in Uzbekistan at a qualitatively new stage, covering all spheres and sectors. The sides expressed willingness to intensify interagency contacts and support joint initiatives.

Following the meeting, a mutual commitment was confirmed to further strengthen friendship and strategic partnership, as well as promote full-scale cooperation between Uzbekistan and the United States.