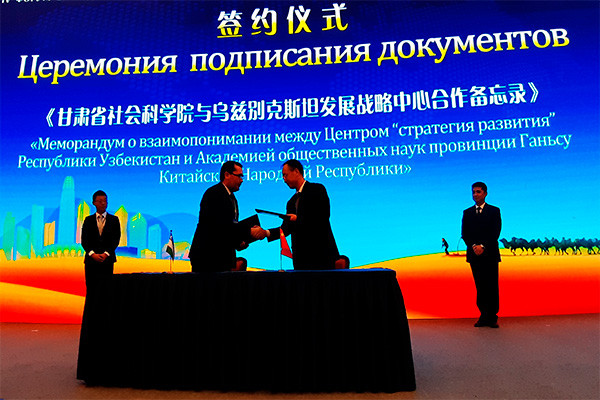 Tashkent, Uzbekistan (UzDaily.com) - The Fourth China-Central Asia Cooperation Forum on the theme “Building One Belt and One Road, Sharing Cooperation Results” is taking place these days in Jinan (China). The delegation of the Center for Development Strategy, headed by the Executive Director Eldor Tulyakov, also took part in this event.

The China-Central Asia Cooperation Forum is a multilateral international conference developed by the Chinese Society of Friendship with Foreign Countries in cooperation with Uzbekistan, Kazakhstan, Kyrgyzstan, Tajikistan, Turkmenistan and interested organizations, as well as regional administrations based on friendly relations and regional cooperation. It is reported by the information service of the Center "Development Strategy".

Within the framework of this forum, the opening ceremony, plenary meeting, as well as panel discussions “Education and Youth”, “Exchange between the Media”, “The Economy of Jinan and Central Asia” and a reception were held.

Representatives of the Center for Development Strategy held bilateral talks with the leadership of the Academy of Social Sciences of Gansu Province for joint cooperation in project implementation, scientific conferences, etc.

During the forum, the director of the Center for Development Strategy, Eldor Tulyakov, made a presentation on the topic: “On the Youth Policy of Uzbekistan”. In his report, he outlined the basic principles of state youth policy in terms of openness and transparency, youth participation in the implementation of state youth policy, support and encouragement of youth initiatives, priority of spiritual, moral and cultural values, as well as non-discrimination of youth.

It was noted that special attention is paid to youth in Uzbekistan. Active work is being carried out to provide the youth with all-round support, ensure their professional orientation and employment, and stimulate their initiatives. It is noted that President Sh.M. Mirziyoev relies on youth. In this regard, various events are regularly held in Tashkent to improve the state youth policy. When discussing other issues at a high level, youth policy issues are necessarily included in the agenda.

The key event of the visit of the President of Uzbekistan to New York was the speech from the rostrum of the 72nd session of the UN General Assembly. In his speech, the country’s leader presented to the world community not only the modern realities of new Uzbekistan, but also put forward global initiatives, including the creation of a convention on the rights of young people. This personifies the principled approach of the President of Uzbekistan in his strategy regarding the development prospects of the state.

Following the Forum, a Memorandum of Understanding was signed between the Development Strategy Center and the Academy of Social Sciences of the Gansu Province of the People’s Republic of China. The signing of this document opens up broad prospects in the implementation of joint projects and research in order to further strengthen bilateral cooperation.