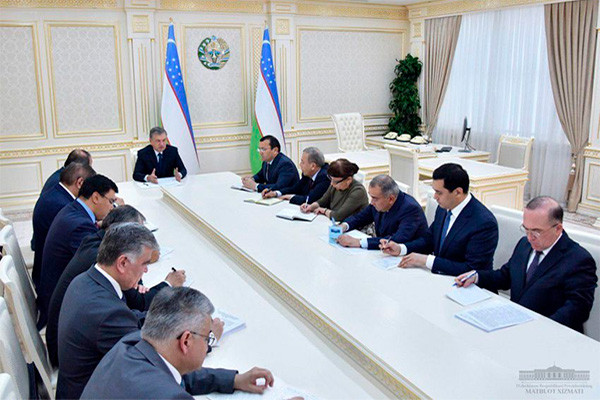 Tashkent, Uzbekistan (UzDaily.com) -- On 13 May 2019, the President of Uzbekistan Shavkat Mirziyoyev held a meeting on acceleration of priority projects implementation with attraction of foreign investment.

This year, meetings were held at the highest level with the leadership of the Federal Republic of Germany, the United Arab Emirates, the People’s Republic of China, the Republic of Korea and other countries. Within their framework, important agreements have been reached, covering such areas as industry, energy, infrastructure, construction, transport, agriculture, healthcare, education. Roadmaps for each area of cooperation with foreign partners were approved by the resolutions of the President to ensure the implementation of joint projects.

At the meeting held on April 8 this year, all projects involving foreign direct investment were divided into four lists and it was determined that the most important strategic projects from the first list will be under constant control of the President.

Implementation of such priority investment projects was comprehensively analyzed at the meeting.

The Uzbek President said that investment is one of the key sources of economic development, ensuring the quality of life and welfare of people. It is necessary to work actively and systematically taking into account the achieved new level of relations with developed countries.

Over the past period, certain activity has been carried out in this direction. Thus, the position of the first deputy responsible for this field of activity has been introduced in the Ministry of Investments and Foreign Trade. Departments on working with each country are organized. In addition, ad hoc working groups are formed headed by responsible leaders.

Reports of responsible persons on the ongoing work on priority projects with attraction of foreign investment were heard at the meeting.

Slowness has been criticized in development of foreign direct investment, inefficiency in the use of huge financial opportunities. Additional instructions were given to ensure timely and unconditional implementation of the reached agreements and joint projects.

At the same time, the task was set to develop new economically effective projects that will also contribute to the creation of jobs.

Main attention was paid to studying the experience of developed countries in the field of attracting investment on the example of the United Arab Emirates. Specific proposals were discussed and tasks were identified for the introduction of the most advanced approaches and methods of work in the fields and industries, as well as for organizing advanced training courses and webinars at the Academy of Public Administration under the President of the Republic of Uzbekistan with participation of experts from the UAE.

The progress of activities carried out on the organization of modern industrial enterprises in Tashkent with attraction of foreign direct investment was also analyzed at the meeting. It was emphasized that these projects should focus on production of marketable products and ensuring employment with the effective use of the existing infrastructure of the city. Instructions were given on their early launch.Particular attention was paid to the issue of improvement of investment projects implementation. The Head of the state noted the need for bringing investment legislation in line with international standards, which serve as a guideline and indicator of reliability for investors.

Appropriate practical measures were identified on the assignments given at the meeting.