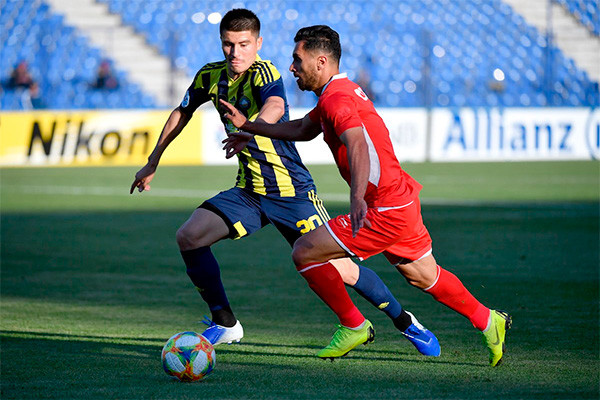 The 2018 finalists came into the match needing a victory to boost their hopes of reaching the Round of 16, instead Persepolis were eliminated from the Continental tournament.

Pakhtakor started on the offensive, and Jaloliddin Masharipov’s free-kick from the left wing sailed past all heads before bouncing off the bottom of the far upright and out for a goal kick.

Goalkeeper Alireza Beiranvand was first tested in the 19th minute as Farrukh Sayfiev’s cross from the left was volleyed by Javokhir Sidikov, but the Iranian goalkeeper stood tall to make the save.

Persepolis were restricted to only a couple of shy chances throughout. Kamal Kamyabinia headed wide at the half-hour mark and Semak Nemati tried his luck on the volley but missed the target before the break. As the game looked headed for a stalemate ending, a swift counter-attacking move saw Pakhtakor take the lead just five minutes from time to the delight of the home crowd at the Pakhtakor Central Stadium.

Ceran shielded the ball well at the edge of the opposition box, before slipping a through pass to Sergeev. The substitute struck with venom from a narrow angle into the top corner of Beiranvand’s goal despite Seyed Jalal Hosseini’s best efforts to block the shot.

Persepolis tried desperately to bring the game level in the final minutes, throwing men forward. Even Beiranvand went up to the other end of the pitch to try and finish a corner, but his effort went wide and despite four minutes of added time, Pakhtakor held on to walk away with crucial three points.