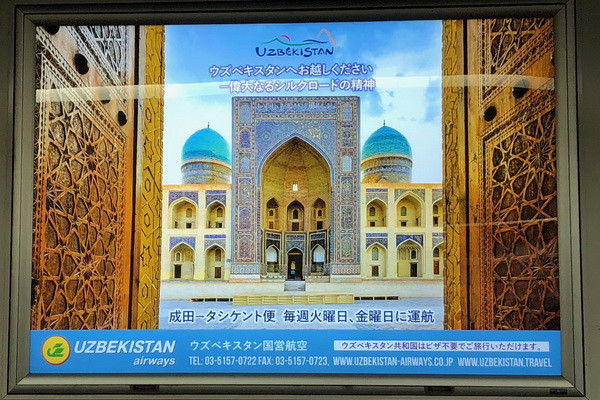 Advertising of the tourist potential of Uzbekistan in the Tokyo subway

Advertising of the tourist potential of Uzbekistan in the Tokyo subway

Tashkent, Uzbekistan (UzDaily.com) -- The Tokyo Metro is the largest in the world in terms of the number of passengers transported, more than 10 million people use its services daily. The Tokyo Metro network has more than 50 lines and 285 stations. The metro and railway lines of Tokyo are open from 5 am to 1 pm.

Undoubtedly, the presence of such a large passenger traffic makes the Japanese subway a very attractive place for companies and business circles to advertise and promote their products.

That is why, following the joint efforts of the Embassy of the Republic of Uzbekistan in Tokyo and the State Committee for the Development of Tourism from 25 April 2019, posters calling on Japanese citizens to visit Uzbekistan were put in in three stations.

Advertising banners prepared in three types and size 122cmХ176cm with colorful photos of the historical sights of Samarkand and Bukhara are placed at Shinjuku, Otemachi and Ikebukuro metro stations in Tokyo.