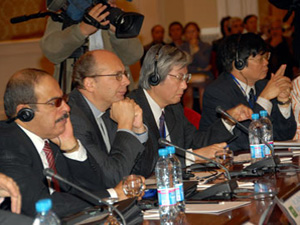 Tashkent (UzDaily.com) -- International conference on development and promotion of cultural tourism in the countries of the Silk Road opened in Tashkent on 23 October. The forum, organized on the initiative of the Permanent Representative of the Republic of Uzbekistan to UNESCO Lola Karimova, gathered representatives of 50 countries and several international organizations, UzA reported.

Uzbekistan is working closely with UNESCO in the issues of development of culture, including tourism. This international organization is actively involved in the promotion of national folklore and crafts - manufacture of carpets, satin and adras, pottery, etc. Jubilee celebrations of ancient cities were held with the participation of UNESCO. Cities of Samarkand, Bukhara, Khiva and Shahrizabs were added to the list of world heritage by UNESCO.

Speaking at the forum, Permanent Representative of the Republic of Uzbekistan to UNESCO Lola Karimova noted that the Great Silk Road was not only a trade route, but also a means of cultural and educational cooperation. The participation of Uzbekistan in its revival is particularly important.

Uzbekistan is known around the world with its historical monuments, places of pilgrimage and leisure. The country has the opportunity to accept some 1 million tourists per year. From this perspective, this conference is a good opportunity to exchange views on the full realization of the tourism capacity of Uzbekistan, and countries of the Great Silk Road.

President of the National Company Uzbektourism Z. Khakimov focused on the present state and prospects of tourism in Uzbekistan. The convenient geographical location of Uzbekistan, modern transport and communications infrastructure contributes to the development of the tourism industry. Currently there are over 4,000 historical monuments and places of recreation, and more than 500 enterprises manufacturing souvenirs in the country. In 1993, Uzbekistan had only 20 hotels, and today their number exceeds 300.

Deputy Secretary-General of the World Tourism Organization T. Rifai said that the scale of world tourism today was larger than ever before. Tourism has become one of the areas of culture, developing the economy. Strengthening international cooperation in the field of cultural tourism enhances the opportunities for enrichment of cultures and understanding.

According to the head of the UNESCO office in Uzbekistan A. Paolini, along with promotion of historical monuments, the number of tourists visiting them is also growing. In such circumstances, there is a need to intensify international cooperation and exchange experience in order to improve the protection of historical monuments. In this respect, Uzbekistan’s activities in this direction deserve attention.

The forum adopted a resolution to support the development of cultural tourism in the countries of the Great Silk Road.