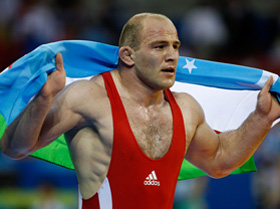 In his first bout Artur Taymavoz defeated Nick Matuhin of Germany. In the first period, Taymazov beat his opponent with the score 4-0.

In the second period, Taymanov claimed a 2-0 victory to advance to quarterfinals of the competitions. In quarterfinals, he will face Iran’s Komeil Ghasemi.